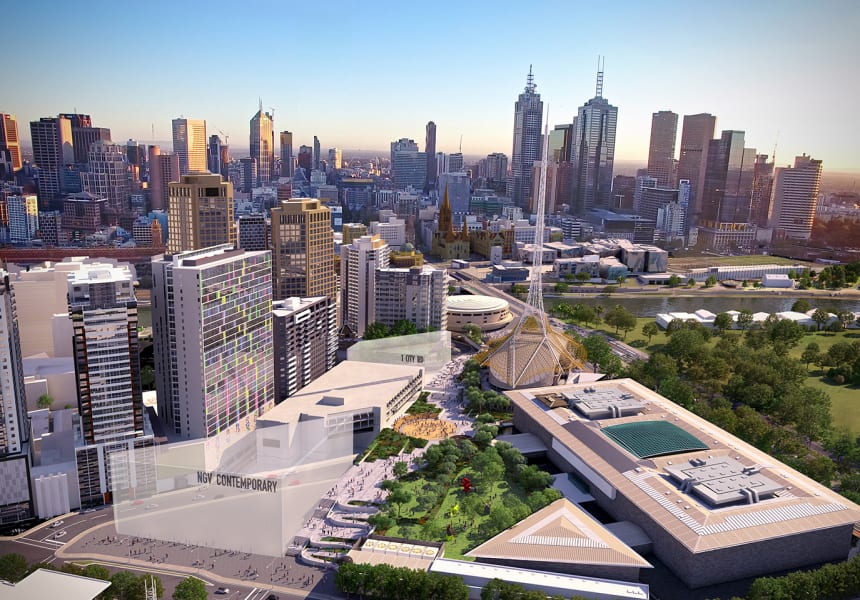 Australian architectural firm HASSELL has been announced as part of the design team tasked with transforming Melbourne’s Southbank arts precinct, in conjunction with New York-based SO-IL (Solid Objects Idenburg Liu). The project, once underway, will create 10,000 new jobs according to the Victorian Government.

Delivering 18,000 square metres of public space to the area, the development will form part of the Victorian Government’s Melbourne Arts Precinct Transformation project. The outdoor component will consist of an elevated urban park, new pedestrian connections and public gardens. The completed project will link the new precinct with Southbank’s existing arts venues including smaller galleries and theatres with a new NGV Gallery in the Contemporary and the iconic Arts Centre, also receiving a refurbishment.

The design’s strong emphasis on nature seeks to create an attraction in its own right, according to HASSELL’s Jon Hazlewood, the project’s Design Director for the Public Realm. UK Horticulturalists Nigel Dunnett and James Hitchmough will deliver the project’s seasonal gardens. The duo previously transformed the Barbican Centre and Olympic Parklands in London.

HASSELL has had no shortage of high-profile work, designing the new SEEK headquarters in Cremorne currently under construction. Not new to state projects, the firm also counts the Melbourne Metro Tunnel and the Geelong Performing Arts Centre redevelopment amongst its projects.

New York’s SO-IL has a similarly impressive portfolio. Having previously collaborated with HASSELL on a shortlisted design for the Adelaide Contemporary Art Gallery, their other projects include Versace’s New York Showroom, the ‘Spiky’ installation in Beijing and the Freize Art Fair of New York.

Project Directors Ben Duckworth (HASSELL) and Jing Liu (SO-IL) noted the project’s impact on how locals and tourists alike experience Melbourne’s arts and culture. The finished project, created to “invigorate and maximise the public experience in this exciting new chapter of the precinct,” is projected to attract over 3 million new visitors to the area.

Victorian Premier Daniel Andrews shares the sentiment, excited for the reimagined Arts Precinct and resulting new public spaces. “This project will bring the colour, creativity and activity that happens within our galleries and theatres outside for all to enjoy – no tickets required.”