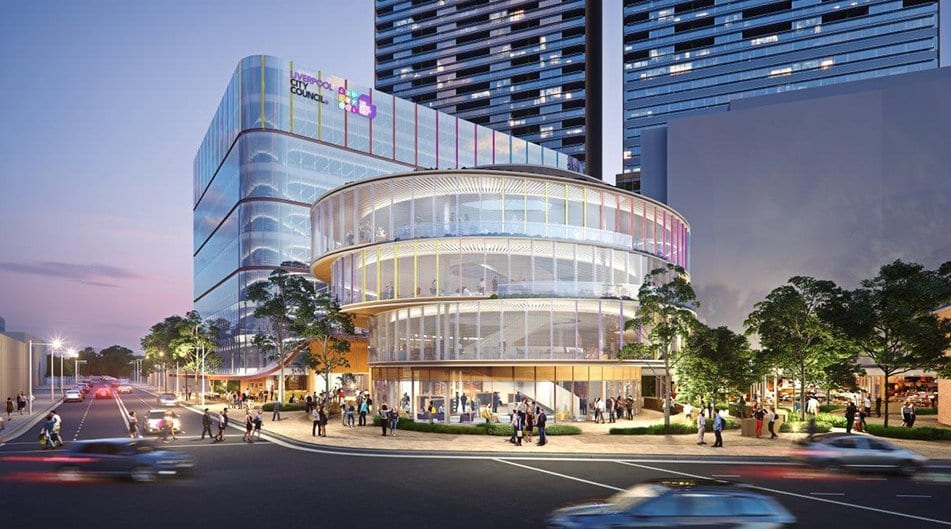 Built is moving into the urban regeneration sphere, having signed a joint venture with Western Sydney’s Liverpool Council to construct a $400 million+ mixed-use development.

The four-building, two-stage project will rebuild the Liverpool town centre to accommodate population growth in the south-west suburb, which has been identified by the Greater Sydney Commission as the city’s third CBD.

The project is part of a wider, $1bn pipeline of work to regenerate Liverpool’s town centre.

The redevelopment will be Built’s largest to date, the company also currently constructing Western Sydney’s tallest building at Parramatta Square.

The project will comprise two buildings, a basement car park and a civic plaza with retail facilities.

Built will construct and development-manage the first stage of the project, which comprises a 5,000 sq m city library and separate 17,000 sq m council building to accommodate council chambers, offices and child care facilities, both designed by FJMT.

The first stage of the development is still subject to approval, and pending this Built will commence construction mid-next year, with completion slated for 2022.

Stage two will comprise a 20,000 sq m, 24-level mixed-use tower, designed to accommodate a variety of tenants including small- and medium-sized enterprises, education and retail, alongside a nine-level building for either a hotel or student accommodation.

The final composition of the stage two buildings will depend on the nature of anchor tenants, with Built currently reaching out to potential leads in the education and commercial industries.

Stage two is scheduled for completion in 2024.

The project’s first stage will be bankrolled by Liverpool Council to the tune of $195 million, while Built will fund early works on the second stage, before seeking an investor to acquire the $250 million+ project on a fund-through basis that would finance the build and result in ownership.

Staying up to date with the latest construction industry news and jobs is easy with Conecta. Create your free profile today.