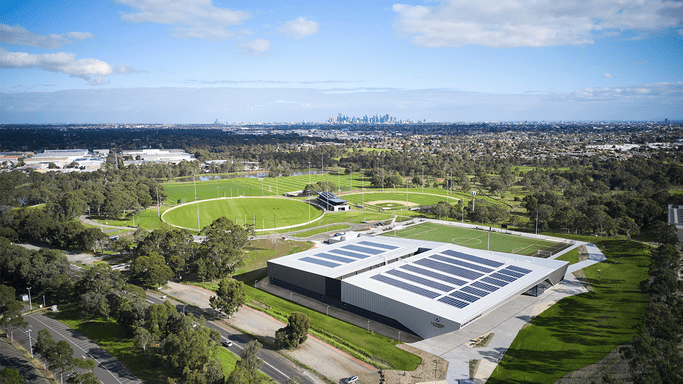 The state government will partner with La Trobe University to create a supersite for women’s soccer, and the “Home of the Matildas” in Melbourne’s north.

The latest addition to La Trobe’s Bundoora Sports Park will be a dual-sports hub, with a Victorian rugby centre also slated for the development.

The soccer centre, which will be the HQ for Football Federation Australia’s national women’s programs and the State Centre for Football Victoria, will have a total of five pitches including a marquee with grandstand seating, with guaranteed access to be provided to community soccer clubs and La Trobe students.

The project, which is expected to commence in December 2021, will be completed in time for the FIFA Women’s World Cup, being held across Australia and New Zealand in 2023.

“We’re serious about improving the visibility of our female athletes. Not only will this investment deliver new facilities, it will mean more young soccer fans get to see their heroes up close,” he said.

The facilities will span 15 hectares, and the Victorian Rugby Centre also planned for the site will comprise a show pitch with grandstand seating and two additional pitches, with high-performance training facilities and be home to the Melbourne Rebels Super W team.

$101.1 million in funding for the project has been allocated in the state budget, with another $15 million promised at a federal level to support the initial $80 million invested by La Trobe University in the sports park.

Construction is expected to create around 600 jobs.

ADCO, Hutchinson, Icon, Kane and Hansen Yuncken are expected to tender for the build.

ADCO have most recently completed the second stage of the La Trobe Sports Park, and contracted to deliver the IKON Park redevelopment for Carlton Football Club.

Kane, which is also currently competing for the final stage of the GMHBA Stadium upgrade in Geelong, is also expected to bid for the Bundoora project.

Icon, which has recently been contracted to deliver three public housing estates across Melbourne, is also tendering for the Kardinia Park upgrade.