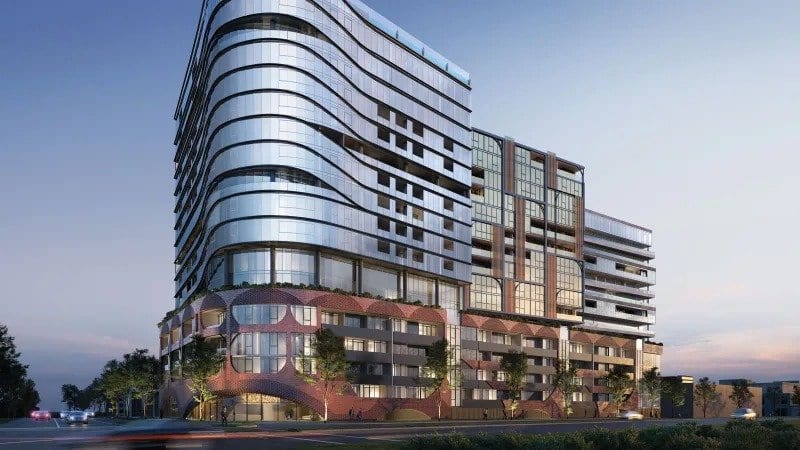 The new tower, called HOME, will be built at the former Amcor Paper Mill in Alphington.

The paper mill site spans nearly 17 hectares, with the tower’s parcel taking up nearly 7500 meters squared. The development plot was purchased by Caydon in 2017 for $29 million.

The new tower will sit in a coveted location on the corner of Heidelberg Road and the Chandler Highway. It’s about 7 kilometers from the CBD and only half a kilometre from Alphington station on the Hurstbridge line.

HOME, which has been designed by Caydon’s own inhouse architects, will comprise of over 300 apartments across 16 levels. Dwellings will include one-bedroom apartments and three-bedroom “skyhomes”, priced at $379,000 and $2.6 million respectively.

“We’ve got a lot of enquiries just from the hoarding on the site, which has encouraged us to kick off the project,” Mr Stratton said.

As one of Melbourne’s largest private developers, Caydon currently has $4 billion worth of developments in its pipeline. Its projects are sprinkled across Australia and the USA, in cities such as Houston and Seattle.

Caydon is also contracted to redevelop the famous Nylex Plastics site in Richmond. It is also building a 30 storey tower in Moonee Ponds and a mixed-use development in Preston.

Mr Stratton said that Caydon does what it can to ensure projects progress smoothly and stick to their budgets.

“We do a lot of work pre-settlement to ensure buyers are ready,” Mr Stratton said.

HOME apartments have already started selling, and if sales targets are met, construction is expected to commence in July 2020.

The former paper mill site touches the banks of the Yarra River and will form part of a larger residential and commercial precinct.

Most of the site is being developed by Len Warson’s Glenvill Group. Their $1.5 billion project includes 2500 homes, townhouses and apartments.

In 2013, Glenvill acquired its share of the site from developer Alpha Partners for $120 million.

Alpha Partners has held onto a comparatively small 2-hectare portion of the site, where it plans to build a $400 million town centre.

You don’t need a permit to build your construction career. All you need is a Conecta profile. Got 3 minutes? Sign up here.