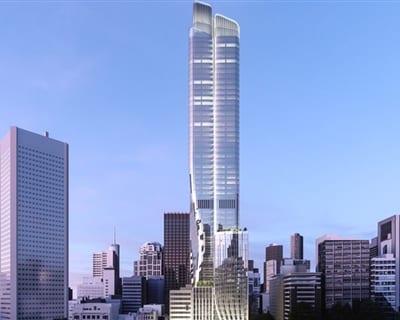 Cbus Super Fund’s property development arm has been given approval from planners at the City of Melbourne for a $1bn office tower on Bourke street.

Designed by Bates Smart, the tower will sit across four blocks on the corner of Bourke and Queen streets, with room for 5,500 employees in 58,000 sqm of office space.

The building, dubbed 435 Bourke Street, was originally proposed as a 55-storey tower, however strict C270 controls resulted in revision of the plans, bringing the height down to 49 levels.

Cbus was granted allowances for extra space despite planning rules limiting the density of city sites due to the building’s significant office space.

The original proposal included a 200 sqm sky terrace on the building’s 53rd floor which would offer views of the Yarra, Port Phillip Bay and the MCG.

Construction of the tower will include demolition of a heritage-listed building, which was backed by council after engineers found the building’s facade to be in poor structural condition.

Four neighbouring properties were acquired for the site, including that which was once promised for the 71-storey Tower Melbourne apartment building, which was axed in 2017.

The building is a stone’s throw from Cbus’s Collins Arch development, dubbed the ‘pantscraper,’ which was also subject to significant revisions due to council requirements.

Cbus chief executive Adrian Pozzo said the building will accommodate the need for office space in Melbourne’s CBD, with a predicted 4.4 million sqm required to house the rapidly growing workforce.

“The significance of this project’s location and the needs of a future city were integral to the project’s design, as well as ensuring planning controls were met and development potential of the site optimised,” he said.

The revised proposal will go to a council vote this week, and following that the submission will move to state government for approval.