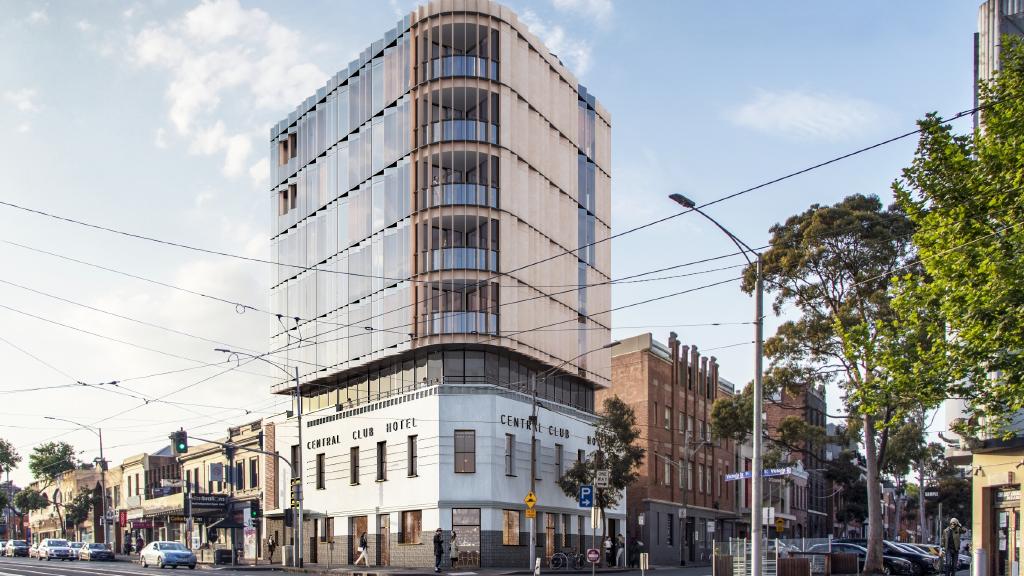 Plans are in the works to turn much-loved Central Club Hotel in Melbourne into an 8-storey accommodation building for the Australian Nursing and Midwifery Federation. Across the road, the union’s headquarters were erected by Multiplex.

The submission for redevelopment comes as a growing demand for centrally located accommodation has led to several redevelopments of institutional buildings.

The Central Club Hotel building dates back to the Victorian era and has an early 20th Century art deco façade. It has been a favourite knock-off venue of Queen Victoria Market traders for decades.

The Federation purchased the building for nearly $9 million in 2017. The Central Club Hotel itself has been run by two local brothers for the past 40 years.

The purpose of the redevelopment will be to accommodate interstate and international nurses for short visits to conferences and professional development in Melbourne. About a third of the 86,000 nursing union members reside in regional Victoria.

South-of-the-river architects BayleyWard have designed the new building, which will retain the heritage façade. The building will include over 30 serviced apartments in both studio and one-bedroom configurations, across six storeys. The lower two storeys will be devoted to food and beverage offerings.

The building will generate its own solar power and have a rooftop greenspace growing produce to be used in the building’s kitchen. Current plans show a recreational garden and beehives, but do not have parking areas for motor vehicles.

While current policy restricts buildings in the area to a height of 24m, current plans for the nurses accommodation reveal a building at 27m. Height restrictions have been in place to prevent new buildings from towering above the Queen Victoria Market.

Builders have yet to be announced, but architects BayleyWard have previously worked with the likes of Figurehead Construction and Frank Pty Ltd. Multiplex’s completion of the union’s headquarters could place them as a preferred contractor.

To hear construction news before the rest of the industry, sign up to industry news below before the start of the next article.