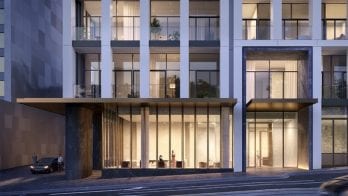 Hacer has been announced as preferred builder for the luxury residential development at 17 Spring Street by Cbus Property Group.

The appointment is the second venture between Hacer and Cbus, who are in the process of completing the Holme apartment complex at 68 Cambridge St in Collingwood.

Work on the $300 million Bates Smart-designed project is set to begin later this year, making it the first residential apartment development to begin in the Melbourne CBD in 2019.

The building will be Cbus’s second residential development in the city’s top end in recent years, having completed construction at 35 Spring Street in March 2017.

Chief Executive of Cbus, Adrian Pozzo said the group is “confident the Hacer Group will complete the high-end product with the utmost attention to detail and finish.”

Cbus hopes for the building, which was submitted for town planning in April 2018, to be the first C270-compliant residential build since the amendment’s introduction in 2016.

The building will comprise two- and three-bedroom apartments, from 105 to 160 square metres, and 134 to 245 square metres respectively.

The development will also feature a 468 square metre penthouse with it’s own 240 square metre terrace and private pool.

More than 70 per cent of residences have been sold since May this year.

The site was purchased in 2017 for $70 million, and was the former Mercure Melbourne Treasury Gardens hotel.

The building is slated for completion mid-2022.