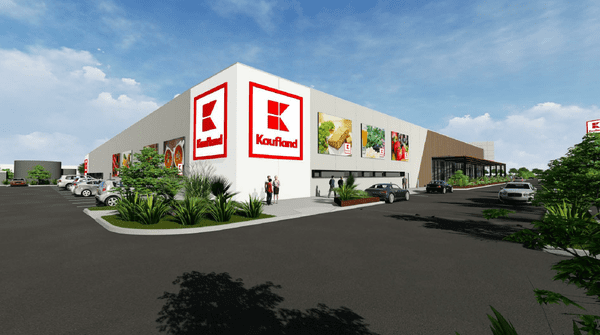 German supermarket chain Kaufland announced plans for nine Victorian sites had been lodged and approved last month, bringing its total number of Australian sites to 20 by 2021.

Kaufland announced plans for stores in Dandenong, Epping and Chirnside Park in March this year, with other sites in Oakleigh South, Mornington and Coolaroo having since been promised.

Plans for an additional nine Victorian sites are subject to independent review, and if approved would be located in Pakenham, Narre Warren, South Morang, Coburg, Lyndhurst, Braybrook, Geelong, Warrnambool and Bendigo.

Kaufland Australia managing director Julia Kern said retail sites in Victoria, combined with the Mickleham DC would create up to 2,400 new jobs, and bring up to $500 million of revenue to the state.

Aspekt commenced construction on a test store in Dandenong in August, which Kern said “marks a tremendous milestone in our development here in Australia,”

“We are very happy to break ground for our first store in Victoria.”

The company has also acquired three sites in South East Queensland and two in Adelaide.

Kaufland’s stores average at 20,000 sqm, the brand marketing itself as “destination supermarkets” stocking both grocery and discount variety offerings.

The ‘hypermarket’ will be headquartered at its approved Oakleigh South site.