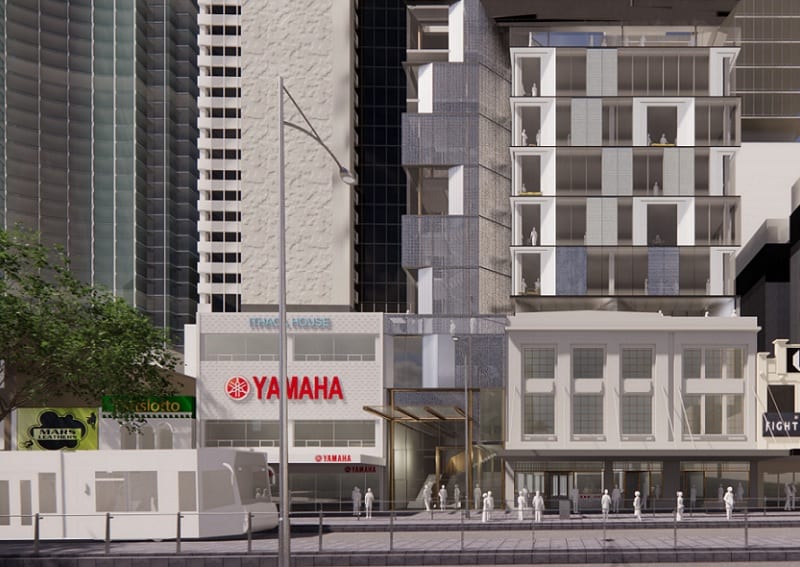 Peter Stevens Motorcycles store situated on 337-339 Elizabeth Street will be transformed into a vertical tower worth $110m.

The Longriver Group purchased the 900 sq m motorcycle store for $31.5m in February of this year.

Their proposal, which was submitted to the Melbourne City Council in July, includes demolishing the site which is part-heritage listed and will;

“Shift from the familiar promenade street mall and expansion of arcades across Melbourne’s CBD to a more compact footprint of vertical retail”.

The application states that the vertical building has been designed to accommodate a variety of retail uses, including restaurants and shops within a strata format.

Longriver Group aims to have the tower completed by 2022 and will retain part of the site’s heritage-listed facade which will be used in combination with Japanese inspired geometric-glass and contemporary design.

Hickory is likely to tender as they are building Longriver’s East Central Tower; a 3,000 sq m tower in Box Hill, estimated for completion in December 2020.

Hickory was engaged on an early contractor involvement basis in order to optimise value management opportunities and compress the delivery program.

Hickory has a portfolio of building similar towers in Melbourne including Aspire, a 65-storey high-rise residential tower at 299 King Street comprising of 594 apartments and;