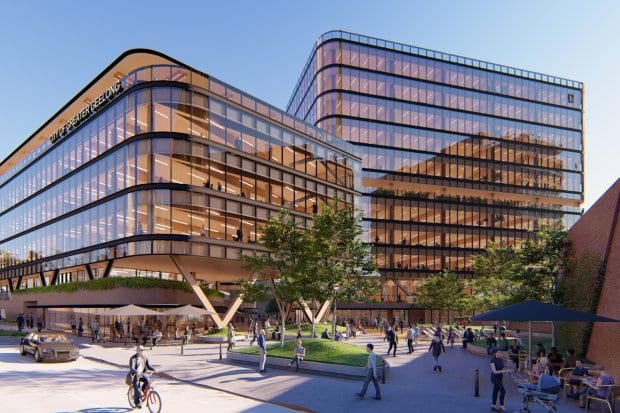 The precinct, a cluster of buildings designed by Cox Architecture, was commissioned by the City of Greater Geelong, which appointed Quintessential earlier this year after tender submissions closed in March.

The civic centre will comprise a 10,000 sqm building to be occupied by Geelong council, centralising staff from 7 separate Geelong offices, and a second, slightly taller building for commercial use.

Geelong council will retain its building via a fund-through deal, while the second building will be owned by Quintessential, bringing the fund’s investment in the city to around $500 million.

The precinct will include 2,600 sqm of active public space, linked to neighbouring Johnstone Park.

The development comes off the back of a number of federal and state government agencies moving into Geelong, including the Transport Accident Commission, National Disability Insurance Agency, and WorkSafe, whose building was delivered by Quintessential.

The project will be a return to the bayside city for Watpac, whose most recent project in the area was the construction of the premiership stand at Kardinia Park, completed in 2010.

The buildings will be constructed using locally-manufactured cross laminated timber, a strategic move to boost Geelong’s manufacturing industry which was hit by the closures of Alcoa and Ford factories.

Quintessential will partner with local company Cross Laminated Offsite Solutions for the build.